Dr. George Wanna, M.D., FACS, has been Chairman of Department of Otolaryngology – Head & Neck Surgery – New York Eye & Ear Infirmary of Mount Sinai and Mount Sinai Beth Israel at The Mount Sinai Hospital since January 2017. He is Chief of The Division of Otology-Neurotology for The Mount Sinai Health System at The Mount Sinai Hospital. Dr. Wanna is a Professor of Otolaryngology-Head and Neck Surgery and Professor of Neurological Surgery at Icahn School of Medicine at Mount Sinai.  He has an extensive research background that focuses on less invasive, safer and more accurate access to surgical sites within the skull through image-guided surgical techniques. Dr. Wanna also has vast expertise in skull base surgery, cochlear implants with hearing preservation and endoscopic ear surgery.  Prior to this appointment, Dr. Wanna was an Associate Professor in the Department of Otolaryngology-Head and Neck Surgery at Vanderbilt Medical Center and Program Co-Director of the Otology-Neurotology Fellowship at Vanderbilt University in Nashville, Tennessee.  Dr. Wanna serves as Director at Large for the North American Skull Base Society.  He serves as Director of the Center for Hearing and Balance and Ear Institute for the Mount Sinai Health System.  He was inducted into the Collegium Oto-Rhino-Laryngologicum Amicitiae Sacrum.  He is a recipient of the Harris P. Mosher Award for excellence in the study, teaching and practice of Otolaryngology from the Triological Society for his work on cochlear implants.  Dr. Wanna has published more than 100 manuscripts in peer-reviewed journals and is the editor of four books on tumors of the ears, glomus jugulare paraganglioma and cochlear implants. He is an internationally renowned hearing and balance surgeon and researcher.  Dr. Wanna completed his residency training in Otolaryngology-head and neck surgery at the Icahn School of Medicine at Mount Sinai and he completed a two-year fellowship in Neurotology at Vanderbilt University Hospital. 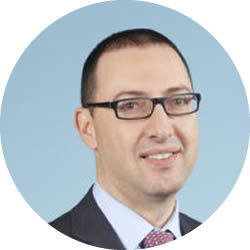